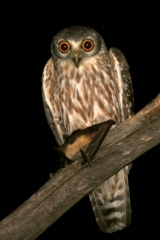 Barking Owls, so-named for their dog-like sounds, are the second-most-common owl around Mornington (next to Southern Boobooks, which look relatively similar).

Last evening, I spotted one silhouetted against the starry sky while I was walking between buildings. The owl perched on an exposed snag long enough for me to run for a flashlight and camera. Cool bird! It sallied out a few times, flycatcher-like, and finally snagged a bat (visible in the owl’s talons). After taking a few pictures, I left the Barking Owl to its tasty snack. Steve, a local bird/wildlife expert, tentatively identified the bat as a sheath-tailed bat. So there you have it!

This morning Sara and I accompanied two other researchers to try mist-netting Gouldian Finches, since they had caught 20 at once yesterday. Today, zero – we saw a couple Gouldians fly overhead, but none hit the net (set up at a waterhole). So, it was back to the Fairy-Wrens; I found my first nest today, with three eggs – but checking it required a sketchy climb up a spiky pandanus tree overhanging the river. Clouds this morning have dampened the temperature a bit, but humidity has more than doubled (to about 70%) – if not one, it’s the other!