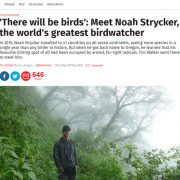 In 2015, Noah Strycker travelled to 41 countries on all seven continents, seeing more species in a single year than any birder in history. But when he got back home to Oregon, he learned that his favourite birding spot of all had been occupied by armed, far-right radicals. Tim Walker went there to meet him. 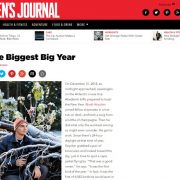 On December 31, 2014, as midnight approached, passengers on the Antarctic cruise ship Akademik Ioffe prepared to toast the New Year. Noah Strycker joined fellow shipmates in a hot tub on deck, and took a swig from a bottle of champagne. Then he did what only the wonkiest among us might even consider: He got to work. 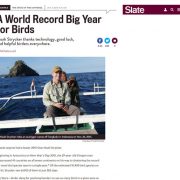 I doubt anyone had a busier 2015 than Noah Strycker. Beginning in Antarctica on New Year’s Day 2015, the 29-year-old Oregon man crisscrossed 41 countries on all seven continents on his way to shattering the record for most bird species seen in a single year. Of the estimated 10,400 bird species on Earth, Strycker saw 6,042 of them in just 365 days. 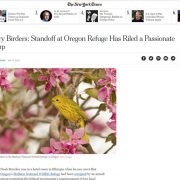 Noah Strycker was in a hotel room in Ethiopia when he saw news that Oregon’s Malheur National Wildlife Refuge had been occupied by an armed group protesting the federal government’s imprisonment of two local ranchers. He had just completed a record-breaking “Big Year” of birding, in which he often spent 18 hours a day, without taking a day off, observing some 6,042 species of birds in 41 countries on seven continents. Mr. Strycker’s obsessive pursuit had taken him to the ends of the earth, but news of the occupation brought Malheur to mind as the place where he first fell in love with birding. 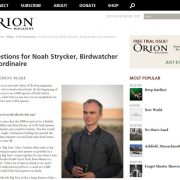 Noah Strycker is an associate editor of Birding magazine, and the author of two books about birds. At the beginning of this year he set out to see 5,000 species of birds before December 31—a feat that no one has ever accomplished. As of October 27, he’s seen 5,014 species. 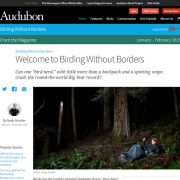 Birds are the world’s premier frequent flyers: They don’t need visas or passports to travel, and there are no blackout days. Whether it’s the Cerulean Warbler on the cover of Jonathan Franzen’s Freedom, the eponymous Goldfinch on Donna Tartt’s bestseller, or the Mockingjay holding together a revolution in The Hunger Games trilogy, to we humans, birds are as free as can be.