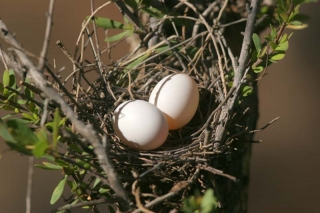 The Purple-crowned Fairy-Wrens have stopped nesting as we head into the dry season, but that doesn’t mean other birds aren’t hard at work. Even after one of the driest wet seasons on record, the grass is green, leaves are on the trees, and babies are all over the place.

Crimson Finches and Double-barred Finches build some of the most obvious nests, which I stumble across almost daily; they’re both enclosed with side entrances (like fairy-wrens) and usually eye level in a pandanus or paperbark. Dove nests are at the opposite end of the spectrum, so flimsy that the eggs seem to hang suspended by a thread. Kingfishers nest in tree cavities, honeyeaters build suspended sock nests, Magpie-Larks construct solid mud structures, and Buff-sided Robins seek out a flimsy fork at the tip of a mangrove branch. Sara found a Pheasant Coucal nest on the ground amid tall grass, probably the most interesting nest so far. As for the fairy-wrens, they’re probably done until August at least, so our work now mostly involves weekly censusing and resighting efforts. Winter is coming!