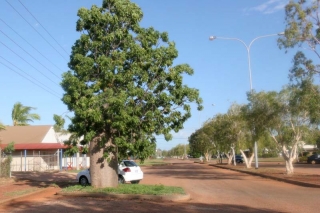 My alarm went off at 2:15 this morning in Perth. When I subsequently presented myself at the airline check-in counter, the attendant said, “Derby? You’ll be off to the mines, then?” I assured her that my business in Derby had more to do with wildlife than ore, and, after the captain quipped, “It’s way too early to be flying,” our plane reached into the Australian sunrise.

Derby is a tiny hamlet (“shire,” actually, according to the airport sign) on the northwest Australian coast. The town’s 4,000 residents, half of Aboriginal descent, are caught between the second-highest tide in the world (usually more than 40 feet) and the most expansive unsettled area of Australia (where I’m headed tomorrow). It was hot enough at 8:30 a.m. that sweat dripped down the back of my neck as I stepped on to the red dust.

I spent the day buying groceries (my last visit to a store for six months) and prowling mangroves. It’s nearly 100 degrees outside with little shade. Tomorrow, I’ll make the half-day drive on a single dirt road to Mornington with two other researcher-conservationists. It’s a grueling, desolate, and beautiful trip by most accounts, with nothing but bush along the way.

Last week, two guys attempted a creek crossing while driving the same route to Mornington. Their vehicle submerged in a flash flood and they both swam to shore, tried to build a signal fire, then walked 30 kilometers in 95-degree heat without water, slept by the side of the road, and reached help the next day. I sure hope we have a smoother trip!

Dryandra Birds and RoosDriving to Nowhere
Scroll to top