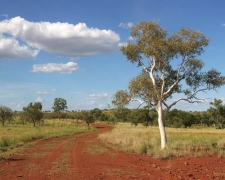 After a bit of errand-juggling this morning in Derby, four of us set off for the long drive to Mornington. From Derby, the Gibb River Road takes off like a dirt arrow through untracked bush; we followed this single-track route for three hours before turning on to Mornington Sanctuary’s “driveway.” This added another 90 kilometers and involved fording several creeks.

All told, the drive took between five and six hours, not including rest stops to pamper Teagan’s six-month-old baby, go swimming at a creek crossing, and take photos of enormous boab trees.

In all that distance, we passed only one other car, and saw just one or two buildings alongside the road. This is one of the greatest wilderness areas left on Earth. Kangaroos, White-quilled Pigeons, and Wedge-tailed Eagles skittered from the road as we drove past endless expanses of red dust, green grass, leafy trees, and impossibly blue skies.

I’m now at Mornington Station, getting settled in to my home (for the next six months) and meeting the staff. There are 17 people on station at the moment. Fieldwork starts at five a.m. tomorrow, to avoid the worst daily heat; Purple-crowned Fairy-Wrens await!