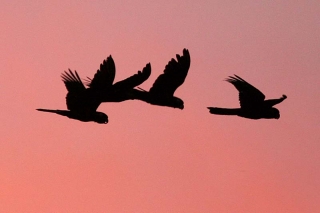 At 5:45 a.m. this morning, I found Maris Lauva waiting outside my Perth hostel, ready for a long day of birding around town. We spent most of the time with Marcia and Bob, from Maryland, who had the day ashore in Perth on a 2-week cruise to Thailand. Turned out Marcia had been on a tour I led during the American Birding Association convention in Eugene a few years back. Small world!

Maris, a local birder, was extremely kind to show us Americans some nice birds. We hit wetlands, lakes, and “the bush,” racking up about 60 species throughout the day, half of which I’d never seen before. Not a cloud in the sky, temps in the 90s. After dropping Marcia and Bob back at their cruise ship for a 4:00 curfew, Maris and I headed into the foothills to watch several dozen Baudin’s Black-Cockatoos fly into an evening roost. The large, impressive parrots, silhouetted against the sunset, capped off an impressive day.

Summah Down UndahDryandra Birds and Roos
Scroll to top