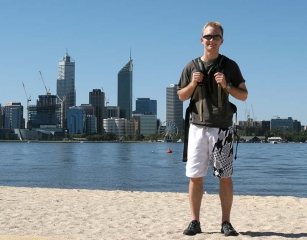 After cutting every line in the Sydney Airport, watching Customs take all of my jerky away, teaching a woman from Venezuela to use her in-flight entertainment system (in return for half a blanket and a packet of M&Ms), and being taxied by a distinctly non-Australian man named Jarko, I am in Perth, in southwest Australia, this afternoon.

Yes, I realize that it’s actually 1 a.m. in the U.S, which means I should be really, really tired after sleeping four hours out of the last 40. But it’s hard not to be energized when I’m looking at palm trees, parrots, and Australian sunshine out the window. It’s currently mid-afternoon, at the tail end of summer, about 98 degrees F, and a man is lying in my hostel dorm room clad only in his underwear, watching kid cartoons in a semi-catatonic state (true story; nothing to do with me; the heat just does odd things to people).

I celebrated my arrival down under with a stroll around town. The walk turned into a blisterfest on my feet, so I retreated before the stove-like sidewalk began to char, and dodged on to a ferry crossing the Swan River (“The River of Swan,” said Jarko the taxi driver) to appreciate the cooling effect of water. I’ve already seen several life birds without even trying – Western Corella, Red Wattlebird, and Singing Honeycreeper. I’m looking forward to adventures tomorrow, starting at 6am, and the next day, starting at 4am, with a local birder named Maris. With jet lag, 4am won’t seem so bad!

Bound for AustraliaAmericans in Perth
Scroll to top