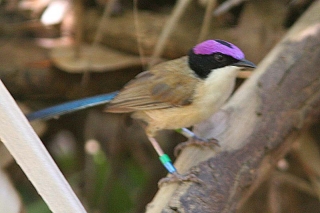 When I casually mentioned to Paul this afternoon that I hadn’t seen a snake here yet, he smirked. “I’ve seen five in the last two weeks,” he said, “and had close encounters with four of them.” When I asked just how close, he smiled, and said, “Come with me.”

We headed to a hole in the ground behind the kitchen. “I had a children’s python in there yesterday,” Paul said. “Let’s stick a stick in there and see what slithers out.” Today, the hole was empty, but Paul wasn’t done yet.

“I was sitting on the toilet in the dark day before yesterday,” he said, “and felt something brush my leg. Figured it was a frog, but it slithered up my shorts. Turns out a tree snake lives in that toilet – he just used me for access.”

Paul’s most wicked snake encounter this week, though, was a bit more dangerous. He discovered a five-foot mulga snake in the kitchen – or, rather, the snake discovered him when he opened a cabinet at eye level. “That thing struck at my face,” he said; “I could see the whites of its fangs, and shut the cabinet door as quick as I could. It got pinned with a couple feet of its body on either side of the cabinet hinge. I called for help on the radio, and JoJo and Jen showed up. We got the mulga into a box but it stuck its head into a plastic grocery bag, got disoriented, and slithered straight at us across the kitchen floor. JoJo tried to pick it up but it squirmed away and hid behind the freezer. And that’s where we left it.”

A mulga bite can kill a man within five hours, so all of us have been tiptoeing around the freezer ever since. That snake hasn’t reappeared, but mulgas are pretty common; I should see one soon enough – hopefully from a safe distance.

Drought and The DryOne Wily Female
Scroll to top