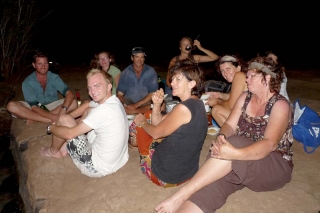 JoJo, who has worked at Mornington Station for the last five years, left today for new adventures elsewhere. So, last night, most everyone headed to Sir John Gorge for a farewell party.

The idea was to take in the sunset before the full moon rose an hour later. The sunset held its part of the bargain, extra-fiery with smoke and glow of a large prescribed burn to the south. But, as darkness fell, rain began to sputter. The moon stayed hidden. (The night before, I rode my bike by moonlight without a torch, er, headlamp, and cast a sharp shadow.)

Rain or shine, though, Swanie had made a pot of dhal (Indian lentils), and we ate while sitting on the warm sandstone, actually glad for the rain. It’s been one of the driest wet seasons on record; this place needs it! JoJo, though, will be missed.