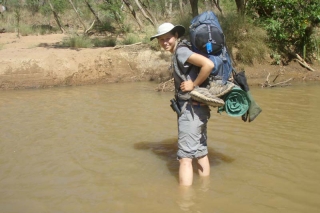 I’ve been kicked out of my room and moved into a tent (more on that later), which means one thing: it better not rain for the next three months. I don’t want my bed getting soaked (yep, I have a whole bed in my tent).

Not that the weather gives any indication of it. We’re now firmly into The Dry, with blue skies and cooler temps through the northern Australian winter. Two months ago, it was about 42 C (108 F) every afternoon; now it’s only reaching 38 C (101 F). Downright cold! Mornings have been around 18 C (65 F), almost chilly.

After about the driest wet season on record, we’re also getting deeper into a major drought. The Annie Creek road crossing, normally underwater, dried up this week, which is unheard of this time of year. Normally it flows year-round, and, in dry years, it’s been known to go dry in October, but we’re only just getting into the dry months. Even the mighty Adcock River (a tributary to the Fitzroy, which, at its highest flood stage, has the 3rd highest output of any river in the world) is down to a trickle small enough to step across without getting your feet wet. What does it all mean? Only time will tell.

Insect SamplingFifth of May
Scroll to top