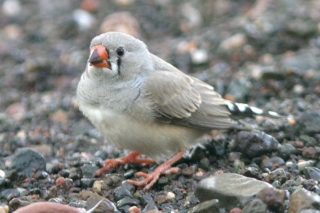 Today’s date might not seem particularly notable, but I know three ways that it is.

First, it’s Michelle’s birthday today – I won’t say her age, but it’s a nice round number halfway between 10 and 70… and an excuse for a party! All of Mornington’s staff turned out for a celebratory potluck, with cake (adorned with sparklers) and an amazing amount of food. Michelle was taken for a birthday helicopter ride this morning for breakfast at a scenic pool beyond Spider Gorge, but her biggest present (to herself) is a 5-week trip to Peru, starting in two days. She deserves it for being a great fairy-wren boss!

Second, today is Cinco de Mayo, that awesome Mexican holiday. I tried to instill some latin excitement by announcing at the table, “It’s Cinco de Mayo!” but was greeted by a host of blank stares. Guess they don’t celebrate that one in Australia – I spent the next five minutes explaining what people do on Cinco de Mayo (drink margaritas and Corona, wear big sombreros, eat Mexican food), but it was no use on these Aussies. They didn’t really get it.

Finally, today I have been at Mornington for exactly two months (I arrived on March 5). I don’t know where the time has gone – flown away on a sizzling sun. Good thing I still have a while to go, because I’ve only begun to explore this place! May the next three months bring as much adventure as the last two.

Bring On The DryWelcome To My Castle
Scroll to top