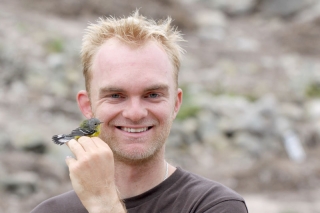 Today began with dense fog, which lifted agonizingly slowly throughout the morning. By mid-afternoon, the fog hung heavily just above the lighthouse, allowing a crack of visibility at ground level. It wasn’t much of an opening, but it was enough to let in a few birds. Finally!

To kick things off, Matt spotted a Magnolia Warbler and quickly caught it in a mist net while I was up at the lighthouse. I came tearing down the path in time to band the rare bird and snap a few photos (it was only the second Magnolia I’d ever seen). Then it was back up to the lighthouse (a steep climb), where four Vaux’s Swifts and seventeen White-fronted Geese materialized from thin air, followed by a Nashville Warbler that I tried to identify as a Connecticut Warbler (making a ridiculous fool of myself), a Black-throated Gray Warbler, and a Lincoln’s Sparrow. Not exactly hordes, but more new birds than we’ve seen in the entire last week! To cap it off, Sara caught a Burrowing Owl after dark – the first one captured this season – and attached a telemetry transmitter after banding the owl. She’ll spend this winter following its movements as part of a graduate project. High fives all around.