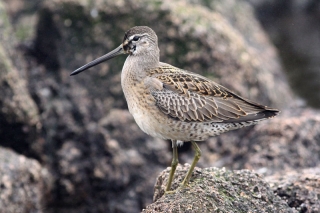 The weather hasn’t changed much, and birding continues to be dismal (the only new birds today were one Swainson’s Thrush, one Red-winged Blackbird, and one Long-billed Dowitcher, hardly stirring stuff). But the wind has shifted toward the south, giving us something to live for: if the fog lifts tonight, morning might bring some surprises. So far, though, thick fog is blocking any rays of hope for a migratory fallout.

One side effect of having so few birds around is that the flies are getting out of control. Kelp flies creep into your eyes, ears, under clothing, and basically make life miserable whenever the wind falters. We need a few hundred hungry birds to eat all the flies on the island (apparently it’s happened before).

Yesterday morning a Great White Shark attacked a seal right in front of our house while we watched from the front steps; a huge fin sliced its way around the floating carcass just offshore for a few minutes, and the shark’s head broke the surface a couple times as it ate with gusto. It was my first white shark sighting, pretty cool. Perhaps even more notable, Oscar and I both beat Jim at ping pong after dinner – definitely a first!

Where Are The Birds?Late Afternoon Action
Scroll to top