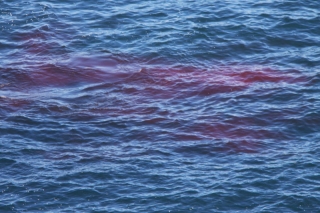 Yesterday I spotted a shark attack from the top of the lighthouse. Attacks are pretty obvious: look for the bright red patch of blood on the water, the cloud of wheeling gulls, and the thrashing shark. We’re starting to see Great Whites pretty consistently this season. Pretty cool.

Otherwise, things have been crowded. Yesterday there were 15 people on the island! We’ve hosted maintenance guys, a team of mouse killers, invasive plant pullers, upper management, and some rich dudes (potential donors) including one sorta famous guy who played in the band called Third Eye Blind. Luckily there was a spectacular shark attack right after the donors arrived.