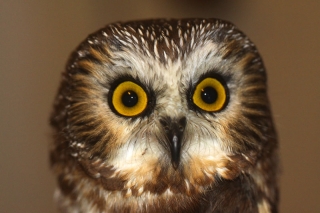 After three days of sustained 20 knot winds, the “fresh breeze” (as it’s officially called) died down last night enough to open a mist net at dusk. Our saw-whet owl has been roosting faithfully outside the living room window each day, and we hoped to catch it.

We can see it from inside, so I checked every five minutes, shining a flashlight through the window glass after the sun went down, to see when it left its roost. The owl woke up around 5:15, spent a few minutes stretching and blinking, and left its branch at about 5:40. By 6:10, it had hit the mist net, and we were admiring it inside the banding lab!

I don’t think I’ve ever touched a fluffier ball of feathers. Partly by shining a blacklight on its feathers (new feathers glow a bright pink under UV), determined that it was a hatch-year bird; just a few months ago, this owl was just an egg in a tree cavity up north. It seems to have settled in now, and might stick around the whole winter. This morning it was back asleep outside our window, as usual.

Saw What?Landing on the Farallones
Scroll to top