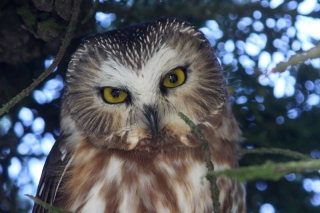 I’d only ever seen one Saw-whet Owl during daylight before, so was pretty excited to hear Liz’s radio transmission this afternoon: “There’s a Saw-whet in our tree!” Since I was watching for shark attacks from the lighthouse, I had to wait a nervous two and a half hours before seeing it, but the owl’s still there, snoozing just a couple feet outside our living room window. Nice!

Apparently, one or two saw-whets occasionally spend the winter on the island, roosting in the same tree each day and eating lots of mice at night. So it’ll be interesting to see whether this one sticks around. We’ll try opening the mist nets after dark this evening, in hopes of banding it after it wakes up (fingers crossed). For now, I’ve never seen a sleepier bird. It just sits there, eyelids drooping, feathers fluffed out, tucked into a sheltered cypress branch. Makes you want to cuddle it.