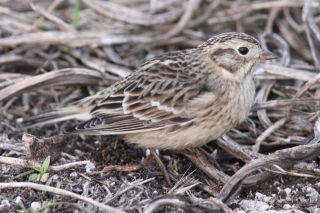 November is supposed to be pretty slow at the Farallones, but yesterday was awesome! Low clouds and light winds created perfect vagrant conditions, and some good birds showed up. First I found a Scarlet Tanager up at the lighthouse (about the 6th island record). Then we caught the tanager in a mist net and I got to band it – at the same time Liz was banding an Indigo Bunting, another rarity. But the best was yet to come.

Jim mentioned he’d heard a longspur fly over the terrace, so Erica and I headed out to look for it. It turned out to be a Smith’s Longspur: the first one ever recorded from the Farallones, the 8th record for California, and a life bird for everyone on the island! To cap things off, two Ancient Murrelets were sitting right by East Landing in th evening, calling back and forth to each other on the water. Pretty cool stuff.