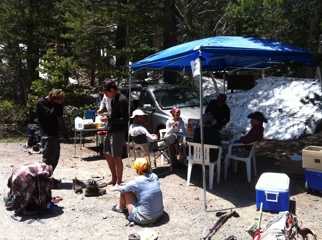 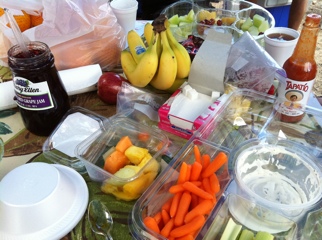 After nine miles of wandering through snow-covered forest this morning, and getting lost a few times, I hit Ebbetts Pass at Highway 4 before noon. Expecting a bare and remote mountain road crossing, I was surprised to find a blue canopy there: trail magic!

A friendly guy named Doug had just set up an incredible pit stop for PCT hikers and planned to keep it going for three days. He laid us out a feast: cooked eggs, toast, Captain Crunch with whole milk by the gallon, apple juice, homemade brownies, hot chili, coffee, hot chocolate, bananas, strawberries, oranges, a fruit and veggie tray, Coke… I stayed and ate for four straight hours with 15 other hikers while Doug catered to every need. He’d even set up a pharmacy box with all kinds of medications, plus a box full of extra equipment from shoelaces to pocketknives, and charged people’s electronic devices on his car charger. Fully powered up, and morale totally restored after a tough couple of days, I eventually pushed another eight miles to camp with Honeybuzz and Annie. Thanks, Doug!