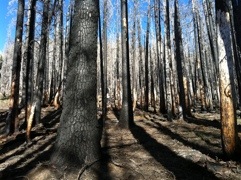 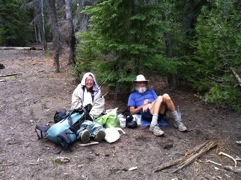 Encouraged to an early start by clouds of mosquitoes around camp this morning, Honeybuzz and I walked 30.2 miles across the Sky Lakes Wilderness today. We both independently discovered that it’s not a good idea to spit violently while wearing your head net, even if you’ve just inhaled a mosquito that somehow made it inside (at least, until Honeybuzz lost his head net and had to rely on 100% DEET instead); otherwise, our greatest entertainment today was given by feeding bits of chocolate to a hungry beetle until it could barely walk – man, can I relate!

We unexpectedly met a PCT legend on the trail this afternoon, a guy named Billy Goat. This is his 10th consecutive summer on the trail, giving him more lifetime PCT miles than anyone besides Scott Williamson (who has walked this trail about 14 times). Billy Goat decided to section hike this year, so, after doing some hiking in Israel, New York, and Vermont earlier this spring, he has skipped around a bit between different parts of the PCT along with another hiker named Amoeba. Pretty interesting guy.