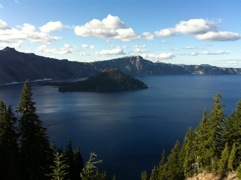 I’ve been dealing with an inflamed right knee for the past five days, hoping to walk through it, but, after ten miles of severe pain this morning, I had to admit that it wasn’t getting any better, and that I probably needed some time off the trail to rest and recover. Fortunately I’m close to home, and my dad was able to pick me up at Crater Lake for a two-day (I hope!) timeout. So, for the first time since starting the trail, I’m sleeping in my own bed tonight.

It felt weird to sit around all afternoon after 20 consecutive 20+ mile days, and even weirder to be dropped back into civilization; in a way, I don’t feel like I deserve it since this stop was unplanned. But I’ve been very lucky to avoid injury so far on this trip; looking around at the three nearest hikers at Crater Lake this morning, one had dislocated his shoulder and was out for two weeks in the Sierra; one had been sidelined for five days with extreme blisters in the desert; and one had just returned to the trail after a bacterial infection landed him in the emergency room in Ashland – and they’re part of the minority that hasn’t already quit. Anyway, hoping to be back on trail soon!

Sky Lakes Visit To The Orthopedist
Scroll to top