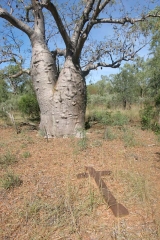 Michelle abruptly diverted onto a claypan as six of us absorbed shocks in the truck this afternoon. “I think this is the track,” she said, peering at a faint tire smudge in hard-baked mud, and cranked the wheel. Soon, we were literally driving through a forest, with 20-foot high trees whipping under the front grille. We folded the side mirrors, so they wouldn’t be snapped off, and plunged ahead into the bush, following faint traces of ruts.

After careening for a while, crammed four across the backseat, we  stopped next to a grove of ancient Boab trees. Heat crackled the dry grass. “Check out the carvings on the trunks,” Michelle said, pointing at a particularly large one. “And the graves underneath.”

Two (or maybe three) rough sandstone crosses were arranged on the ground. On the boab tree was etched in long-overgrown letters: “Harrey The Hon. W. Allen Esq.” and a date that looked like 18-8. “It’s said that some explorer stopped here in the 1800s,” said Olya, “but who, or why, I’m not sure.” In any case, at least two bodies were buried here, absolutely the middle of nowhere, and I wondered about their fate. I suppose an ancient boab would mark a fine resting place, but this one was really off the edge of the map; we’d driven an hour and a half, far from even any decent 4×4 road, and it looked like nobody else had visited this year, anyway. The boabs, inscrutable, inverted-looking, weren’t telling. We left shaking our heads, with piqued curiosity about the people who came long before.

Xavier Rudd Drops InLeeches and a Sunset
Scroll to top