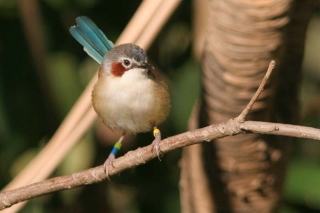 I was excited to discover a Fairy-Wren nest with three eggs a couple weeks ago. When Michelle and I went to band the seven-day-old chicks, though, we found only one giant baby in the nest, almost twice the size of an adult Purple-crowned Fairy-Wren. A cuckoo!

Cuckoos in Australia are like cowbirds in North America: they lay eggs in other birds’ nests, hoping to pawn off parental responsibility on other species. Cuckoo chicks hatch quickly and push out all other eggs in the nest. Sometimes, the outcome is a bit ludicrous; I recently observed a tiny Bar-breasted Honeyeater feeding a Brush Cuckoo fledgling more than three times its size. You’ve got to wonder what they parents are thinking at that point – are they proud to raise a giant?

Fairy-Wrens aren’t often parasitized by cuckoos, probably because their nests are enclosed. Last season, one female Horsfield’s Bronze-Cuckoo laid single eggs in four different wren nests along Annie Creek (DNA confirmed that the eggs all originated from one female). The nestling we found this week could have been a Horsfield’s, or maybe a Brush Cuckoo; after taking a blood sample, we’ll eventually be able to figure it out in the lab.

In this case, the cuckoo didn’t make it. At 10 days old, it was eaten in the nest by a goana at 11am on March 30. How do we know? A motion-sensored camera trap positioned on the nest actually caught a 15-second video of the lizard sneaking up to the nest. The video lines up with my field observations: happy Fairy-Wren parents feeding the cuckoo chick at 6am on March 30, and an empty nest the next morning. Life is rough in the wild.