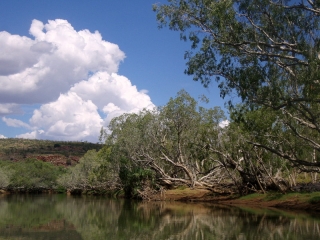 Yesterday morning I woke in my tent, ate breakfast, suited up, hopped on a quad and drove several kilometers down a dirt track to start a fairy-wren survey of the central Adcock River. It turned out to be an eventful morning.

After a couple hours of pushing my way through a nearly impenetrable tangle of freshwater mangroves, I arrived at territory 219 – where all the action happened. I found the pair of fairy-wrens there, but they quickly skulked away into a wall of spiky pandanus along the water’s edge. When I tried to follow, the whole place exploded – with enormous bats!

Hundreds of Black Fruit Bats were roosting right where the fairy-wrens had disappeared. Each bat, with a face like a fox (hence the nickname “flying foxes”), was furry, jet-black, with a three-foot wingspan, and cranky. Every time I took a step, the bats screamed, flapped noisily, picked fights with each other, growled, cackled, and brought all kinds of debris to the ground. They smelled rank, with an acrid, musty, ammonia flavor, overwhelming the senses, and, as I crawled through the jungle-like vegetation, bats were on every quarter, some within several feet, all hanging upside down from branches, clinging with their feet and wing-claws, each the size of a small cat, black as night, pressing closer and closer, staring, jostling.

Half an hour later, I was a little way upriver when a very large bird came gliding around the corner – a White-bellied Sea-Eagle, the first I’ve seen at Mornington. In its talons was a Black Fruit Bat! The eagle was pursued by three smaller Whistling Kites, vying for position, hoping for a handout, but seemed nonplussed by the extra attention as it flapped powerfully above the water, disappearing silently around the bend. So much for that particular fruit bat.