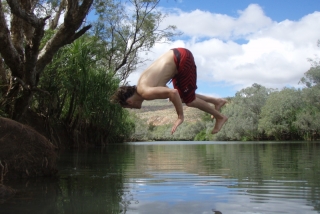 People here say the Fitzroy River, at its highest flood stage, has the 3rd highest flow of any river in the world. It’s a pretty flashy system, though, which means the water empties out quick. The rest of the year, like now, the Fitzroy is meek and mellow, shallow enough to wade across in some places – perfect for swimming, save the occasional freshwater croc.

We don’t worry too much about the freshies (they keep to themselves, except when they occasionally bite people). There’s a perfect swimming hole about 9 kilometers from Mornington Station, called Blue Bush (no idea why), which makes a nice afternoon getaway. A few of us went down there this weekend to float around in inflated truck tires and stare cautiously at some tourists. Rainbow Bee-Eaters and Agile Wallabies flitted and hopped, respectively, until the sun set around 5pm. Solstice has hit – the days are getting longer now!