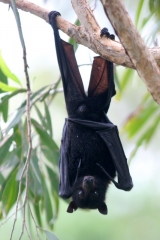 There’s a reason these guys are sometimes called “flying foxes” – just look at that face. Like a fox with wings. Or maybe a baby gorilla (actually, Joey just told me that fruit bats used to be considered as relatives of primates, but it’s been disproved).

These bats, called Black Fruit Bats, hang around during the day in communal roosts before flying around after dark. I stumbled across one roost of about 200 bats the other day in a pandanus clump – full of weird sounds, like cackling, and a smell like ammonia. Each one is almost two feet tall. Definitely the biggest bats I’ve ever seen.

They’d be creepy if they weren’t kinda cute in a way. With that fuzzy face and round, curious eyes, I’d almost want to pet one. Except it would probably bite me and give me rabies – or something more exotic, since rabies apparently doesn’t exist in Australia (true story). Wonder if I could train one to hang from my shoulder, like a reverse parrot.