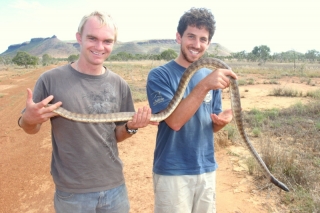 Michelle, Joey and I spent a rigorous day yesterday exploring some new territory on Mount House, a neighboring active cattle station about 2 hours drive away, looking for fairy-wrens along two sections of the Adcock River.

We found some fairy-wrens, but particularly exciting were two Black-headed Pythons, one in the morning and one in the evening, at different places along the dirt road. Both snakes were about two meters long – longer than me – bigger than any I’ve seen yet in Australia.

Black-headed Pythons are non-venomous, but still have fangs, and might bite, and, who knows, might strangle you, so we were pretty careful. But it’s hard to resist the urge to pick up anything slithery (especially for Joey), so voila: photo op. This particular python had a lot of scratches on its skin, and a large number of ticks (who knew snakes get ticks?), so maybe it’s due for a shed. In any case, an awesome piece of wildlife.