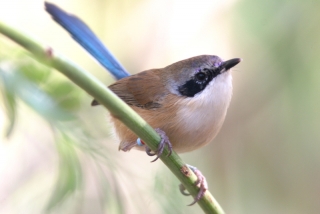 Yesterday, while searching for fairy-wrens along the Adcock River, I suddenly felt something big crawling up my pant leg. Assuming an ant, I swiped it out – but then the thing flew off, and it turned into a very large, beetle-like bug with long, bright orange antennae. It bit me a couple times on the way out, but no big deal – just a little sting.

At least, until today. My left knee has swollen to twice its normal size! I showed it to Steve, who told me a story of a lady who needed a skin graft after getting bit by some virulent beetle around here. That wasn’t too encouraging, so I typed “australian black beetle with orange antennae” into Google Images. Amazing what you can find out these days – turned out to be something called a Spider Wasp, which attacks spiders larger than itself (but not, apparently, a bug that kills people). Just a regular old wasp bite. Anyway, it’s itchy!