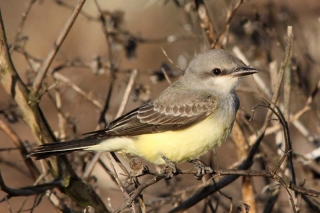 This afternoon Matt spotted a shark attack from the lighthouse. By the time I got up the hill (to the best vantage point on the island), all that remained was a giant slick of red blood on the water, half a seal carcass, and a few gulls. The Great White was gone.

We watched as a boat called the Superfish sidled up to the bloody spot, threw a couple of decoy floats in the water (to attract sharks), and dropped a steel cage overboard with two divers inside. People pay big bucks for the chance to dive with Great Whites here.

Yesterday afternoon several of us watched in amazement as one of the resident Peregrine Falcons slammed a newly-arrived Burrowing Owl a few hundred yards from the house, took the hapless owl out over the ocean, and dropped it in the water. The falcon flew a couple of circles, retrieved the still-struggling owl from the sea surface, and carried it away to devour in a more private place behind Saddle Rock.

This morning a Western Kingbird put in an appearance, uncommon but regular on the island in fall, along with a Western Tanager, three Black Phoebes, a Red-winged Blackbird, a Killdeer, and several other migrants.

Welcome To The FarallonesFog
Scroll to top