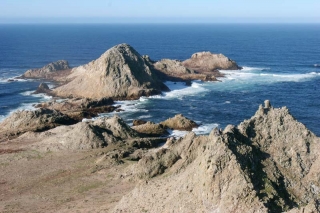 I arrived on Southeast Farallon Island day before yesterday under clear skies, a brisk north wind, and after a deckhand on our chartered boat somersaulted overboard while trying to transfer gear (it was a tense moment). Six of us are living in a 130-year-old house on the island. I’ll be here until December.

The Farallones jut in a burst of granite about 20 miles from the Golden Gate Bridge. The islands, covering barely 60 acres, host the United States’ largest seabird and marine mammal colonies outside Alaska. But the seabirds nest in summer and mammals breed in winter, so the fall season here is focused on different phenomena: it’s the peak season for Great White Sharks, which are bigger and more numerous at the Farallones than anywhere else in the world; and fall brings migratory songbirds, with the chance to find unusual species rarely seen in North America.

The Farallones are a pretty weird place even without the sharks, seals, and birds. The islands, designated a National Wildlife Refuge and managed by Point Reyes Bird Observatory, are off-limits to the public; the airspace is a no-fly zone; boats aren’t allowed to approach closer than 300 feet. We get shipped food supplies once every two weeks via a network of volunteer sailboat owners from San Francisco. This fall’s crew is made of three other twenty-something bird interns, a grad student studying Burrowing Owls, and one supervising biologist from PRBO. There will be no days off. Looking forward to a great season!

ShakedownSharks and Raptors
Scroll to top