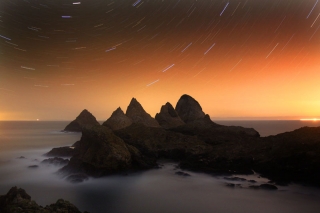 When eight guys in a weird-looking boat showed up this week, flying a pirate flag, and started trolling for sharks around the island, we got curious. You need a special permit to approach Great Whites at the Farallones, and none of us had seen this boat before. And when they launched an inflatable Zodiac, along with a fancy-looking submersible with two divers inside, and began filming with professional cameras, Jim went to investigate.

Turned out they were a Discovery Channel film crew shooting for Shark Week. The team stuck around for a couple days, played with their expensive equipment, swam in circles for a while, and gave us a large bottle of whiskey before heading to their next location. Hope they got the footage they were after; maybe my silhouette will show up on TV as part of the landscape.

Thanksgiving on the IslandWelcome to Costa Rica
Scroll to top