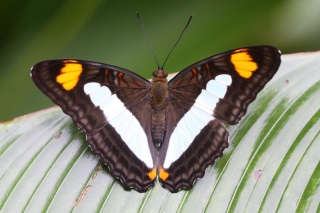 He arrived with a princess and an army of bodyguards to take a tour of the park – which is kind of like the Smithsonian. Our supervisor, who pointed out birds to the visiting royals, said nobody was allowed to look at the prince’s face: they were required to address themselves to some inanimate object nearby, out of respect. And only four people were allowed to actually talk to him; everyone else had to speak through one of those four. Before the prince arrived, one dedicated park employee was assigned to follow a sloth for 24 hours to make sure they could point it out at the proper time. Police cordoned off the entire block, and everyone who entered had to go through several metal detectors. But it worked out: the prince, who happens to be the president of Japan’s ornithological society, liked his visit to INBio Park, and joined a long list of VIP visitors (and donors) over the years including the Pope, the Dalai Lama, and former President Bush. Who knew?