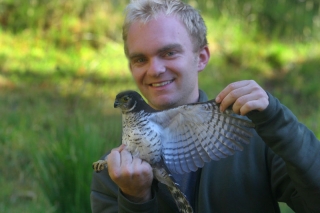 The backcountry trail catapults north from Mexico through the deserts and mountains of California, Oregon, and Washington, ending at the Canadian border 2,665 miles later. To cover the distance in one season, I’ll have to do it in four months, averaging 22 miles per day without breaks. The logistics are intimidating: I bought four pairs of shoes, crampons, and an ice axe this week, and ordered a bear canister to protect my food, which will be mailed to post offices along the route. About 300 hikers attempt the whole trail each year, and about half of them make it; more people have summited Everest than finished the PCT. But I’m psyched for the challenge! It’s gonna be a great summer.

I’m home in one piece after spending the winter banding birds in Costa Rica. Apologies for the silence over the past month; I went on a whirlwind birding trip at the end of my three months in CR (and saw more than 450 species of birds!) and have been recovering in Oregon for the last couple weeks.

As things gear up for the summer, though, I’m ready to plunge into a new adventure, of a somewhat more physical type. I will begin hiking north from Mexico on about May 17, with regular updates here on progress. Stay tuned!