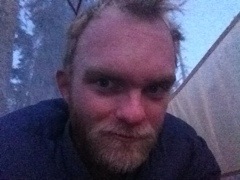 After sleeping in a real bed last night (!), I headed to breakfast at a tiny restaurant around the corner in Belden. A peanut butter milkshake took priority, followed by scrambled eggs, French toast, sausage, and, finally, a blackberry milkshake.

When the post office opened, Honeybuzz and I hiked over there to shuffle some packages. I had three boxes waiting and mailed off my ice axe, traction spikes, rain pants, long underwear, and some extra food, which lightened my pack considerably. It’s summer, and the high Sierras are over: no more long days of slogging through snow!

By the time we hit the trail it was early afternoon, and we had a continuous, 14-mile climb from 2,400 feet (the lowest I’ve been in more than a thousand miles), where it was nearly 90 degrees, to over 7,000 feet, where we scrambled through snowdrifts before setting camp on a high ridge. Should hit Lassen soon.

Angel To Angel Halfway There!
Scroll to top