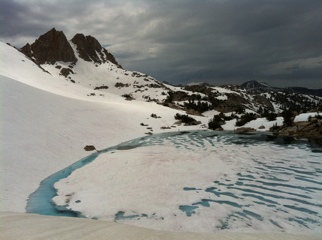 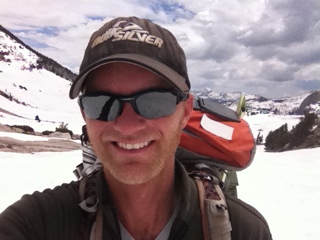 A late start since I had to wait for the morning ferry out of VVR, but I returned to the trail by 10 am with a new crew of hikers, and spent the rest of the day walking with Crasher, Flash, and Noodles Romanov. We climbed 3,000 feet to Silver Pass, which was snow-covered but not particularly noteworthy, then worked slowly north, putting in a solid 16 miles by dinnertime.

I met an interesting fellow named Caveman this afternoon, bearing a striking resemblance to that Geico guy. He had no maps for this section and had just completed a massively frustrating ten-mile circle after getting lost in the snow. While looking over our maps, he told us a bit about his aspirations to become a professional cage fighter, then apparently decided to try to night hike the remaining 15 miles to Mammoth when his friend Eight Mile arrived. Good luck, guys… I’m going to sleep ;)