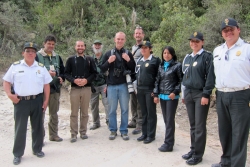 Just back from deepest, darkest Peru, where I have spent the past week and a half attending the Birding Rally Challenge – a wild, invitation-only birdwatching competition sponsored by Peru’s tourism board.

Put simply, the Birding Rally Challenge is a contest between six teams of birders (from five countries) vying to see the most species of birds in one eight-day period, along a 1,500-kilometer route between the coast and the Amazon. But it’s much more than that: The rally is a chance to promote ecotourism in Peru; to raise awareness of birds within the country; to undertake a rapid-assessment scientific inventory of birds; and, of course, to have a crazy adventure along the way. 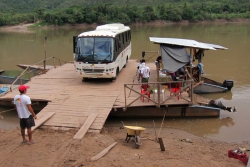 The whole thing is organized by the Peruvian government and Inkaterra, a hotel association. The six teams of birders, each armed with dedicated guides and drivers, follow the route in separate vans, stopping where they want along the way to pick up bird species, big-day style. Standard tours cover this route in sixteen days, and compressing it to half that time means getting up at 4:00 am every morning and gunning hard from one spot to the next.

I followed along somewhat more sedately in a “press bus,” which bumped along behind the teams of birders, visited many of the same locations on the route, and stayed in the same hotels each night. Altogether, including press, drivers, guides, organizers, politicians, a police escort, an ambulance (!), and the six teams of birders, the rally’s convoy included more than a dozen vehicles and more than 100 people. We stayed in top-tier hotels, ate delicious food, and soaked up birds, scenery, and a bit of culture along the way. 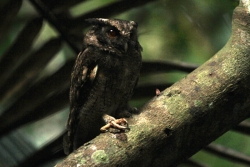 This being my first trip to Peru, I was able to see several dozen life birds – highlights including Marvelous Spatuletail, Gray-bellied Comet, and Plumbeous Euphonia, not to mention all the colorful toucans, trogons, and tanagers. But, since we blitzed across the country at full tilt, hardly stopping for even the most dramatic vistas, I had just a taste of what is really possible there. The winning team, from Louisiana State University in the U.S., recorded an impressive 636 species of birds in eight days, scoring an Ash-throated Antwren-shaped trophy from the Peruvian Minister of Tourism himself. The first Birding Rally Challenge took place last November, and its organizers plan to continue it twice each year, though the event is devilishly expensive (by my back-of-the-envelope calculations, somewhere around a half million dollars). In the long run, everyone hopes, the rally will pay off by attracting more birders to visit Peru. 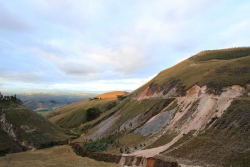 I certainly want to go back. For a bird nerd like me, Peru has it all: incredible birds, fantastic environments, friendly people, rich culture. What’s not to love?

But now, an entirely different adventure. Just one day after returning home to Oregon, I am off again, sitting here in the Seattle airport, on my way to Norway. I’ll be spending the next two months on an expedition cruise ship in the Arctic archipelago of Svalbard, working as an on-board ornithologist. Onward!

Why Don’t Woodpeckers Get Headaches?Pictures from Svalbard
Scroll to top