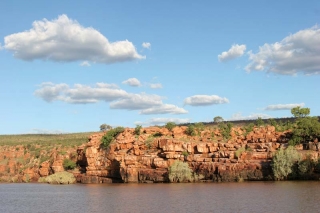 As I walked up to my room this evening, just after sunset, a crowd of half a dozen people were gathered just outside my door. I opened my mouth to ask what was going on, but, just then, Ben arrived on a quad, screeching to a halt in a cloud of dust, and jumped lightly to the ground. “Where is it?” he asked.

Trish pointed at a dark shape in the grass, and things suddenly happened fast. Ben crouched and dove, and, in the blink of an eye, held a wriggling 4-foot snake dangling by its tail. With his other hand, Ben opened a cloth bag and lightly dropped the snake inside, twisting the opening so it couldn’t escape. Then, almost jovially, he hopped back on the quad to transport the snake “a couple k’s down the road” where it might live a bit more peacefully.

I turned to Paul. “Was it a Mulga?” I asked. “King Brown,” he affirmed (two names for the same thing). The most feared snake in this part of Australia. One bite can kill you in less than five hours, so I appreciated Ben’s bare-handed snatch. But, then, he worked with Death Adders in a past project, so no big deal. I was just glad to see the snake taken somewhere else – away from my front doorstep.

Tomorrow Michelle and I are planning a big day, surveying a long stretch of the Fitzroy River by canoe for Fairy-Wrens. It’ll be good, she says, if we don’t tip over in the rapids at some point, which apparently happens more often than not on this survey. Stay tuned!