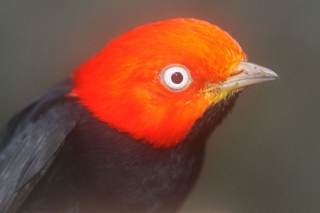 The rain let up enough for us to band a full six hours this morning, and we were rewarded with this awesome male Red-capped Manakin – almost the last bird of 2010. (The very last bird we banded today, if you’re curious, was a Kentucky Warbler.)

This is going to sound very nerdy, but Ed and I are excited that every bird in the entire world will have a birthday tonight. Officially, “hatch year” birds will become “second year” birds on January 1. (Since you’re never sure exactly when they hatched, we age birds by the calendar instead.) More to the point, though, it’s already 2011 in some parts of the world; to all, a Happy New Year, and Pura Vida from Costa Rica!

It’s A Bird, A Plane, The Sun?White-collared Manakin
Scroll to top