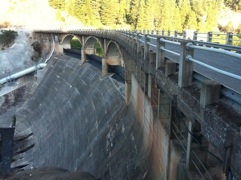 After crossing the Lake Britton Dam, it was nice to ascend slightly into mid-elevation forest today where the trail traversed shady groves of firs and pines along endless ridges. Honeybuzz and I hiked steadily all day and camped next to a creek after 29.1 miles.

In an open area near some cliffs this afternoon, I looked up in time to watch three Peregrine Falcons swooping and diving right over my head, probably a local pair chasing off an intruding young bird. It was a nice distraction; the trail was pretty monotonous today, although I did catch up to five PCTers I hadn’t met before (Red Blaze, Half Fast, Wetsmoke, Wiz, and Buttercup).

As far as I can tell, there are about 30 hikers ahead of me now, out of 400 who set off this year from Mexico intending to walk to Canada (many of whom have since quit, skipped, or flipped). Almost everyone started two and a half weeks before me (I know of only one person who started later), so I’ve now passed the majority of the northbound herd. If I stick to schedule, I should hit Oregon about August 10th.