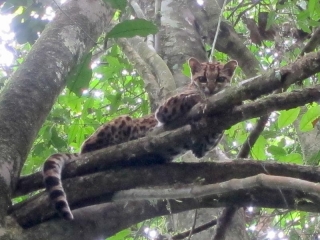 At 1:30 this afternoon, near the end of an eight-hour block of tracking Wedge-billed Woodcreepers through the jungle, I noticed a flock of agitated antshrikes mobbing something in a tree just off the transect I was working on. Thinking that they might have found a roosting raptor, I plunged into the undergrowth to see what the fuss was about.

It took a minute to spot: a dense clump of fur about 20 feet off the ground, tucked above a couple of horizontal branches. Upon closer inspection, the fur had spots. Some kind of cat!

Tiputini has one of the highest densities of jaguars in the world (about 22 per 100 square kilometers, according to camera trap data) and is also home to jaguarundis, ocelots, and margays, but all those tropical cats are rarely seen. Some researchers have worked at Tiputini for years without encountering a single feline. So I was extremely lucky to discover one within three weeks of arriving here!

The cat was small, so obviously not a jaguar. I couldn’t decide if it was an ocelot or margay (both of which are about the size of a bobcat), but it was very cooperative, probably because it had spent the entire day asleep. It barely flicked an eyelid as I jockeyed for the best photo angle.

After a few minutes, I realized it would probably stay there until dusk. A moment of indecision: should I tell anyone? I was working alone with no radio, and the station was about a mile and a half away by muddy trails. Ah, what the heck; I tore off in search of Rebekah, tracking woodcreepers about a half kilometer away. When we returned, the cat hadn’t moved a muscle, so I left her there and ran all the way back to Tiputini to spread the news. An hour later I was back at the site with Abby and Sara; the cat still hadn’t budged, and I had run more than three miles in rubber boots.

The photos seem to show a margay, which has a slightly longer tail, flatter head, and bigger eyes than an ocelot (otherwise they’re nearly identical). Sweet – now, to find a jaguar …

Dropped From 130 FeetThe Tale of Tiny Tim
Scroll to top