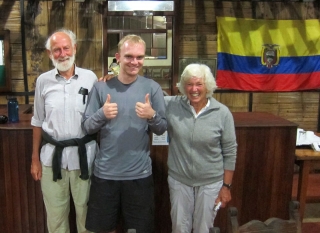 Birthdays are obviously healthy, since the people who have the most live the longest. I had a memorable one today.

It’s pretty cool to turn 26 in Ecuador’s Amazonian rainforest. Last year I was banding birds in the highlands of Costa Rica for my 25th. Next year… who knows?

Incredibly, out of the dozen researchers currently residing at Tiputini, one of them (Brandt, a Smithsonian scientist studying Wire-tailed Manakins) shares my exact same birthday: Feb 9th.

So, we had a double celebration this evening after dinner. The two of us teamed up to blow out the candles on an enormous apple crumble cake baked specially by Tiputini’s staff – can’t say I’ve ever shared a birthday cake before…

And we were lucky enough to celebrate with some distinguished guests. Peter and Rosemary Grant, two of the best-known scientists in the world, dropped in to Tiputini this week on vacation after their latest field season in the Galapagos, where they have been studying evolution in Darwin’s finches for the past 40 years (if you’ve taken a general science class in high school or college, you’ve probably learned about their research). They were nice enough to sing us a happy birthday along with the rest of the Tiputini crew.

I spent most of the day in the jungle, tracking Wedge-billed Woodcreepers and hoping, as always, for a cool wildlife sighting. Something amazing did happen today, as it turned out, just not to me; Amy, tracking monkeys a couple kilometers away, ran into a jaguar early this afternoon and had a long and close encounter with it, alone and deep in the forest. Definitely jealous – it made my Spangled Cotinga seem pretty ho-hum.

Meanwhile, thanks to everyone who sent birthday wishes!

The Tale of Tiny TimBiggest Big Day
Scroll to top