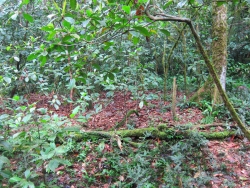 At 9:10 this morning, I was working alone in a remote research plot about two miles from Tiputini. I’d just finished a transect of mixed-flock surveys and was standing quietly in a small clearing, writing in my field notebook, when something rustled a leaf at the edge of the open area. Thinking it was one of the peccaries I’d flushed a few minutes earlier, I glanced up just in time to watch a full-size Jaguar emerge from the undergrowth in front of me. I thought: Holy $%&*!

It was close, really close, and angled toward me, apparently not noticing my presence as it approached slowly across the clearing. I stood absolutely still and had time to admire the intricately spotted fur, long tail, rippling body, and even the sharp feline teeth exposed in a slight grin across the blocky head. The animal was the size of a very large dog but much stockier, and had a relaxed, muscular gait. When it was within 25 feet, just a few steps away, I began to inch my hand inside my pocket to retrieve my camera. The slight movement finally caught the Jaguar’s attention and it looked up, locked eyes on mine, and froze.

There followed a few slow beats of absolute silence as we both began to comprehend the encounter. I realized how utterly alone I was, more than an hour’s hike from the station, off-trail in the rainforest without any means of communication, face to face with the king of the jungle. My adrenaline finally kicked into gear. I wondered what the cat was thinking. 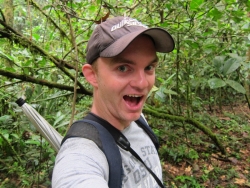 Evidently it didn’t like me very much, since, after a few moments, it turned its head and, with a few unhurried paces, merged into the surrounding greenery as silently as a ghost. It had been in view less than a minute.

According to camera trap data, Tiputini has one of the highest densities of Jaguars in the world (estimated at 22 per 100 square kilometers). Hardly a day goes by when we don’t talk about them. They’re usually the most-wanted animal for visitors to Tiputini but are very rarely seen; in the last two months since I arrived, only one other person has encountered one. I’m extremely lucky to have seen one so well, and on such intimate terms – many sightings are fleeting glimpses or from boats on the river.

Guess it’s been a good year for cats. I ran into two different Mountain Lions while hiking the Pacific Crest Trail last summer, and found a Margay here at Tiputini last month. What could be next?