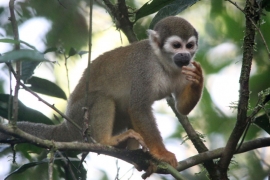 It’s easy to get preoccupied with birds and big cats, but Tiputini is full of other interesting wildlife. In the past two months I’ve seen some cool stuff here.

For starters, monkeys are abundant. Tiputini is remarkable in hosting ten different species of primates, of which I’ve encountered eight: howler, wooly, spider, squirrel, tidi, and saki monkeys; golden-mantled tamarins, and brown capuchins (I haven’t seen the owl monkey, which is nocturnal, or pygmy marmoset, which is rare).

Collared peccaries (wild pigs) are also quite common, and sometimes give you a rev-up when they suddenly crash away through the undergrowth. Less conspicuous are the red brocket deer, a smallish, shy species of deer which hides remarkably well in the jungle—I’ve only managed to see a couple of them.

There are a couple of squirrels here, including the red jungle squirrel, which is impressively large and bright. You might find an agouti (a type of rodent about the size of a squirrel) lurking around the station, or, if you go to the bathroom at night, a small possum in the ceiling.

One of the best ways to see mammals is by boat. I was lucky to watch a tapir swim across the river on my way in to Tiputini and snapped a really bad photo of it as it hauled out on the muddy bank. A little farther upstream we found a peccary crossing the river; I didn’t know pigs could swim! I’ve also seen pink river dolphins a couple times in the last two months—a very strange animal indeed—and, once, a large ray. 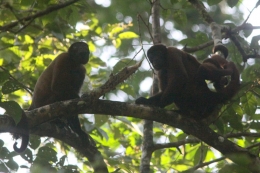 Visiting groups often go on boat trips after dark to spotlight wildlife, and, as a researcher, I like to jump aboard. I’ve accompanied five such trips so far and seen crab-eating raccoon, paca, emerald tree boa, lots of caiman, and several potoos. Last week we found dolphins at night, which was a cool experience.

Snakes are generally rare. Tiputini has two particularly venomous snakes, the fer-de-lance and bushmaster, neither of which you want to tangle with, but I have yet to encounter a single one, though some students found a bushmaster on a night hike last month.

Several weeks ago a young tamandua (a type of anteater) was brought to the station; apparently it had been found or confiscated in one of the settlements in the region and found its way to Tiputini to be released to the wild. It had partially imprinted on humans and was one of the cutest creatures I’ve ever seen or cuddled with! We named it Tammy. It seemed to do OK finding food on its own, so we let it free in the forest—hope it’s enjoying its new home.

There are plenty of large animals I haven’t spotted yet. At the top of the list is the giant anteater, which a couple other researchers have seen since I’ve been here. Tiputini also has giant armadillos, giant otters, wild dogs, porcupines, rabbits, anacondas, tayras, and, of course, the big cats: though I’ve been extremely lucky to encounter a jaguar and a margay, there’s still three more species of cats out there—puma, ocelot, and jaguarondi.

A couple of days ago, a group of visitors photographed a Harpy Eagle perched next to the river on their way in to Tiputini (jealous…). Maybe it’ll eat the sloth I spotted earlier. Every day brings something new!

JAGUARAnnouncing… My Next Book!
Scroll to top